The Fertile Common Ground Between Technology and Agriculture

At first glance, Silicon Valley and the vast cornfields of the U.S. Midwest may appear to have little in common. But a growing relationship between big data and agriculture is poised to improve yields, reduce raw material use and decrease production costs. Over the past year, the precision agriculture industry, which has pioneered the use of unmanned aerial vehicles and robotics to increase data collection and efficiency in agriculture, has continued to expand in the United States and around the world. As drone use in agriculture becomes even more prevalent and new achievements in machine learning and artificial intelligence are made, high technologies — the internet of things, big data, robotics and artificial intelligence — will overlap with agriculture more and more.

The concept of precision agriculture, or the use of data to enhance agricultural production, has been around for more than two decades. The field includes a range of different technologies, including GPS-guided tractors, yield and soil monitoring, variable rate applications for water and fertilizers, and data collection by satellites and unmanned aerial vehicles. Technology in agriculture will enable farmers to do more with less — especially as advances in sensor technology and computing technology continue — to keep up with rising demand for agricultural products over the next few decades. Using even one of the precision agriculture technologies can save farmers substantially on a per-acre basis.

Giving Farmers an Eye in the Sky

The U.S. Federal Aviation Administration has issued new regulations, effective Aug. 29, governing the use of unmanned aerial vehicles in the United States. The rules, which still require pilots to keep craft within their lines of sight and prohibit flight over people not involved in the operation, have proved restrictive for some activities (for example, delivering goods). They are less limiting for agriculture, however. After all, the new operating guidelines should pose little challenge to commercial agricultural activities in rural areas with low population density. Furthermore, the regulations repealed a rule requiring commercial operators to receive permission from the FAA to fly a drone in certain situations, including crop surveys, one of the main logistical obstacles limiting drone use in precision agriculture. Now, the market for drones in agriculture might take off; by 2035, the precision agricultural sector could be responsible for 80 percent of commercial drone use, according to the Association for Unmanned Vehicle Systems International.

To reach that point, however, the agricultural sector will have to fine-tune the technology to suit its needs. The drone and sensor technology currently used in precision agriculture is often adapted from other sectors without being optimized for agricultural applications. Compared with satellites and conventional aircraft, which are also used in monitoring crop production, drones operate much more closely to crops, improving the spatial resolution of the digital images they collect. But innovators must develop a means to make sense of the various data that drones can collect. As computing power and machine-learning technologies continue to improve, the power of precision agriculture will increase in kind, eventually overcoming this constraint.

Surging investment in precision agriculture technology in recent years reflects the growing interest in the field. From 2014 to 2015, investment in drones and robotics grew by nearly 240 percent. Last year alone, nearly 500 agricultural technology startups raised $4.6 billion (nearly twice the amount raised in 2014), according to AgFunder Investing Report. Though food e-commerce alone attracted $1.65 billion, drones and robotics accounted for some of the largest investments of the remaining $3 billion. Companies based in the United States, Switzerland, Australia, Japan, China, Brazil and Israel are all striving to improve precision agriculture through advancements in artificial intelligence and machine learning. Even developing countries such as Pakistan, India and the Philippines are exploring options to implement the technologies in their own agricultural sectors. Agricultural giants such as John Deere, Bayer, BASF, Dupont and Syngenta are also investing in technology, acquiring startups and developing platforms to gear predictive analysis and machine learning toward agricultural applications. 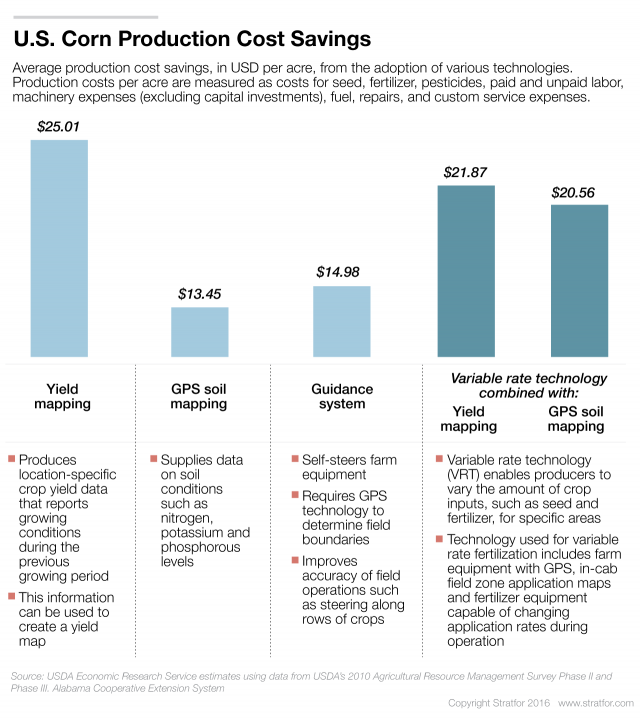 On top of aggregate data, such as annual yield numbers, precision agricultural technologies can now gather and catalogue real-time data on everything from soil moisture and nitrogen content to plant health. Moreover, data-sharing initiatives are working to collect more information to improve analytic and predictive capabilities. Combining data from multiple operators enables farmers to better identify and anticipate environmental and even climatic trends.

Although drones will facilitate data collection, the future of agriculture — much like the futures of manufacturing and other industrial sectors — lies in predictive analytics. Beyond its applications in monitoring crops, analytics can help to accelerate biotech development as well. Using big data to analyze complicated genetic codes will allow nascent gene-editing techniques such as CRISPR to home in on desirable traits in crops more quickly and precisely. The application of these technologies in agriculture, in addition to cutting operational costs, will enable a growing global population with shrinking resources to cultivate more food with fewer inputs.